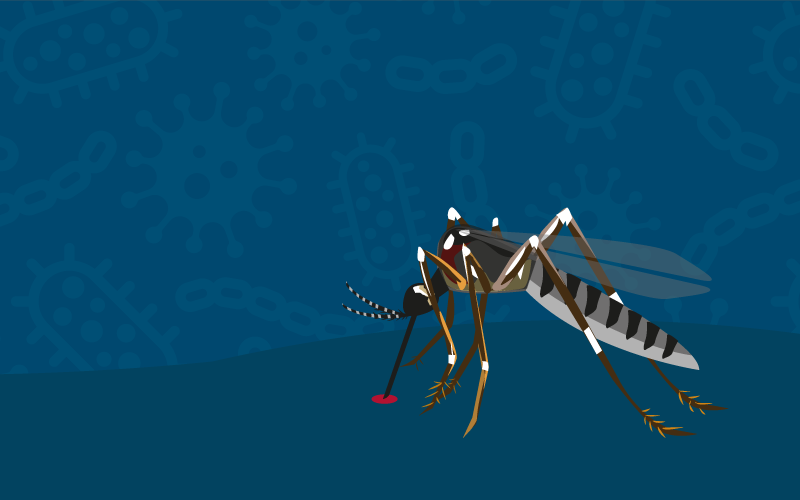 September 18, 2017 – Floodwaters are receding in Texas and Florida after hurricanes Harvey and Irma. But there’s a new threat on the rise that’s sure to affect areas hit by the incoming hurricane Maria too: mosquitoes and the diseases they carry, like Zika and West Nile.

The scene is the same for hundreds of thousands of homes in the hardest hit areas. Curbsides are stacked to the sky with rotten wood, soggy trash bags, broken furniture and other dangerous debris. Pieces of torn apart homes line streets in many areas, this debris becomes a new home for pockets of standing water – an absolutely perfect environment for mosquito larvae to thrive in.

Take a look at this video from Refugio, Texas to get a better idea of just how big the mosquito population is growing:

Areas in Texas and Florida have begun taking precautions to protect against the post-hurricane population surge and the threat of the West Nile and Zika viruses.

To help keep things under control, the Texas Department of State Health Services (DSHs) enlisted the help of FEMA and the U.S. Air Force to provide aerial spraying “to reduce the effects mosquitoes are having on recovery efforts and the possibility of a future increase in mosquito-borne disease.” As of September 17, an estimated 4.36 million acres were sprayed across a handful of counties.

How PEPID can help clinicians on the scene

Doctors face different challenges with a massive influx of patients across affected areas. While this influx has not been mosquito-related so far, the looming boom in the mosquito population means a highly increased chance of becoming infected.

In fact, mosquitoes were a growing concern in these areas before hurricanes Harvey and Irma were on anyone’s radar. As of September 13th, the CDC reported 23 Zika cases in Texas, 50 in Florida (including the first case of sexual transmission), and 41 in the Virgin Islands. Meanwhile, the CDC also reported 71 cases of the West Nile Virus in Texas as of September 12th, and the number in Florida isn’t documented.

In this case with the mosquito population set to explode, preparedness is key and that’s where PEPID comes into play. “A quick review of common related injuries is helpful in treating an influx of patients due to a disaster,” says Dr. Nick Ho, Chief Emergency Medicine Editor at PEPID. In this specific case, brushing up on symptoms of Zika and West Nile could be extremely helpful and save time once these cases begin to roll in. In fact, PEPID has just updated its section on West Nile virus, so with PEPID you’ll be getting the most current information regarding the disease.

To support the clinicians helping the victims of Harvey and Irma, PEPID has opened its most popular suites for free use until October 9th. These suites include disaster related content for common injuries, as well as detailed clinical information and tools to assist with mosquito-borne illnesses, mold-induced asthma and allergy complications, and more. We’ve also updated our content on West Nile.

Since 1994, PEPID has been a leading developer of clinical and drug information resources and mobile applications for healthcare providers, hospitals and medical schools in 159 countries. PEPID’s comprehensive tools enable healthcare professionals to efficiently pinpoint diagnoses, treat diseases, detect harmful drug interactions and allergy sensitivities, accurately dose patients, and provide quality patient education – quickly and efficiently, all from the palm of the clinician’s hand.